The project started when I wanted a way to find more torque from the 4age engine. So when drifting through transitions and reducing-radius bends off power, it will be easier to continue the drift when you come back on power. 4AGE is very peaky, when you drop out of the power it is almost impossible to recontinue drift unless you have time to rev and then clutch dump, but sometimes it is too late by then and is not very smooth.

Because I am a student I have a limited budget!! No money, want torque = 7AGE

Additional info this is into a 1986 AE86 UK spec, no special tools required (usual socket set and ring spanners etc) except engine crane, which I hired from my local hire shop.
I worked on my driveway, as I don’t have a garage and completed the swap in two days this was working very hard though I recommend taking your own time and making sure everything is correct.

It is good to have a manual with you for torque settings and detailed information on the individual jobs you will undertake.

Stage one – remove 4age
Work methodically around the engine removing bolts and wires, label anything you don’t know or may confuse you if you forget.
Return removed bolts to their holes (this is because some bolts are made to be tightened up harder than others which just snap! I learnt the hard way so you don’t have to! More on this later)
Remove radiator for space

It is the lower 17mm nut on the engine mount, which needs to be removed (the hidden one which is awkward to access) this needs to be undone not the top one!

I removed the sandwich plate behind the oil filter because it is easier to access than the oil line (to the oil cooler) and is the same as the one on 7AFE wrap in a plastic bag and check the seal has not fallen off the back.
Cable tie the wiring looms and oil cooler pipes out of the way in the engine bay

Stage 2 – building 7AGE
Again work methodically around the engine finishing each area properly so you don’t forget anything
Strip down 4age engine you need everything apart from the block
Leave intake manifold connected to the head, camshafts must be removed to access head bolts, take care to note the loosening pattern and orientation of camshaft bearing caps – see manual
When removing the head remember to loosen the bolts in the correct pattern – see manual
When removing parts especially the engine mounts take care to return the nuts and bolts to their holes so you know which are used for what and what holes on the block are utilised (more on this later)
Use two nuts locked against each other to remove studs then return them finger tight to their original holes.
Strip down 7AFE engine only, the bottom end is required so remove all other mounts, timing gear etc
When removing the head remember to loosen the bolts in the correct pattern and leave them in the head in their original positions so you can make sure the same ones go back in the same holes later on
Take care with the head gasket it should be a nice 2 layer metal one (if it isn’t order this from Toyota)
Clean head and block mating surfaces I used some emery paper and a Hoover to Hoover out all the dust created!! Clean the head gasket
Bolt 4AGE head on to 7AFE block using the original 7AFE head bolts, each back to their original positions. use correct tightening pattern first all to 29nm then each through a further 90 degrees then all again through a further 90dgrees, see manual
Return camshafts and tighten camshaft bearing caps in the correct order facing the correct way (they are each labelled on the top with an arrow and number like E1 which stands for exhaust side first bearing cap (the closest to the cam pulley) E2, E3, I1, I2, I for inlet side etc)
You may need to clean them to see the markings add some engine oil to all the bearing surfaces before tightening the bearing caps. Return cam covers, bearing caps and cam covers to 13nm
Transfer the water pump and all its pipe work it should all come off 4AGE as one piece with three 12mm (15nm) bolts on the front of the block, use the seal from the 7AFE pump as it is probably a bit newer, clean the mating faces. The pipe support bracket on the side of the engine block cannot be used I just left it as it seemed secure enough you could make a simple bracket to hold it.
The water pump to head pipe needs to be extended, just cut it in half put the 3/4inch hose over, you only need about 5cm and clamp with two jubilee clips. 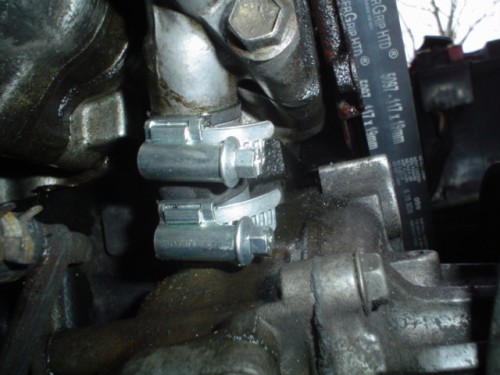 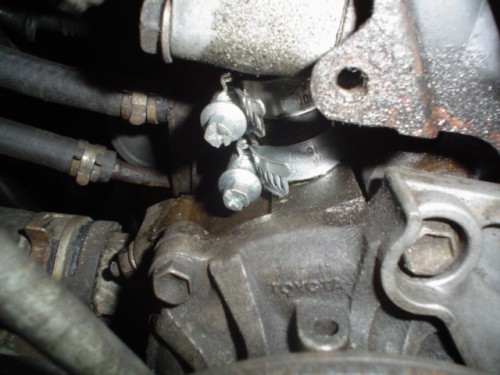 Fit adjustable timing pulleys, firstly mark them against the original pullys for the original timing marks. make marks on the new pulleys by drilling a shallow 3mm hole where the timing mark should be (the same place and fashion as on the original 4AGE ones (the small indent on the rim) check the right one is on the right side as they are different see manual for orientation
Fit the lower timing belt pulley from the 4AGE engine to the crankshaft
Line all the timing marks up then fit Porsche 944 timing belt, re adjust the tensioner to take up the slack
The lower timing belt cover from 4AGE needs to be modified to fit, look at it from the back there will be a second outer circle around the hole for the crankshaft just file it out to this outer hole and it will fit nicely
You will notice the camshaft pulley timing marks do no line up correctly when the lower pulley mark is lined up. Use the adjustment on the cam pulleys to retard each camshaft by approximately 3-4 degrees to so it all lines up nicely

The middle timing belt cover will no longer fit

On to the back of the engine
Remove 4AGE flywheel and bell housing backing plate, clean the backing plate and transfer it to the 7A block (9nm)
Bolt on the 7AFE flywheel using the correct bolt pattern (74nm)
Bolt on your new 212mm clutch (a nice little upgrade) (19nm)

On to the left hand side
Check which holes are used by looking at the 4AGE block:
Run through these with a thread tap!!! If you don’t what will happen tome will happen to you! I used a different bolt, which just sheared off in my block because it was not intended for that much torque and the thread was too stiff!! Long!
Transfer all the studs and fit the engine mount and alternator bracket, the lower gearbox mounts can no longer be used as they don’t line up chuck them away.
The intake manifold support needs to be extended I did this by making a simple extension bracket at the top 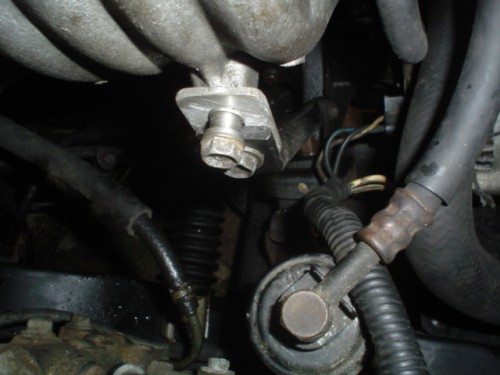 The right-hand side
Check which holes are used by looking at the 4AGE block:
Run through these with a thread tap!!! If you don’t what will happen to me will happen to you! I used a different bolt, which just sheared off in my block because it was not intended for that much torque and the thread was too stiff!! Long!
Transfer all the studs and fit the engine mount, the lower gearbox mounts can no longer be used as they don’t line up chuck them away. Fit the block earth lead and starter motor loom clip which should have come off with the engine mount from 4AGE
Remove the oil filter sandwich plate
You might as well fit the starter motor

Top
Change injectors take care not to damage the fragile seals, in fact you should replace upper and lower seals as they are probably very worn out! When I replaced my injector lower seals I thought the guy gave me the wrong part it looked so different to the deformed old thing I took out!
A tab must be cut off the Celica injectors try one on a injector plug and you will see which tab needs cutting use a sharp knife then the plug will fit like normal

Stage 3 – return engine
Drop it back in you will have to wiggle it around to get it on the lay shaft from the gearbox jack the gearbox up this helps
Refit all bolt and wires work methodically around the engine and make sure everything is done before moving to the next area
Fit the oil cooler sandwich plate which you wrapped in plastic and a new oil filter
Check the oil line up the distributor (see manual)
Fire it up! Set the ignition timing I found the original marks on the lower timing cover not to line up it shows about 3 degrees too much advance so take this into account when you set the timing (again i learnt the hard way experiencing detonation after 7000RPM !) 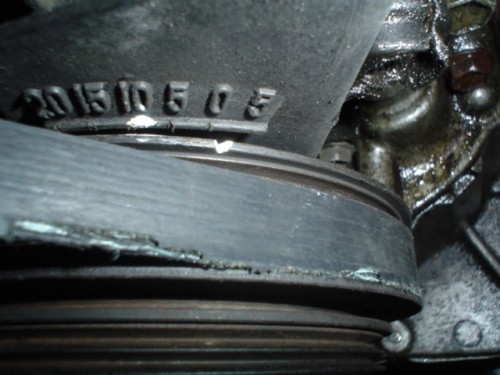 Experience a 4age with a killer torque band, the rear tyres have no chance!!! I was a very happy bunny indeed

ps it doesnt like being reved over 7k and power drops off at about 6700 so this is where i have set my shift light, it pulls hard untill then.
If anyone has any questions or queries post them and I will try and edit this post to incorporate the answers!
after 300+ miles now the engine hasnt blown up so im pretty chuffed, and after much testing against a close friend last night i can safley say the engine has lost no pace despite the reduced redline and changing gear early, (this was a fear of mine because there is normally always a trade off) the new torque band just pulls it through the gears, i never thought id say this but torque really is very exciting too on the street adding a whole new dimension to the corolla!

so as my head has been skimmed (but i dont know to what thickness)
i would guess the compression ratio to be around 9:1

ps values used were mainly found on club 4age and cannot be varified i have tried to be acurate please point out any mistakes you find in my working!

4 thoughts on “4AGE to 7AGE conversion”